It’s all my fault! I’m the reason that Steve Raine took out boxes and boxes of memorabilia from his garage to dig up old photos of himself and his wife, Beauty (aka Mary). They just celebrated the 42nd anniversary of their first meeting, and will soon celebrate their 40th wedding anniversary. You see, some time ago, I asked Steve to share with our classmates how he and his wife met, and he said he was too busy at the time, but would write something when things were a little less hectic.

Then as he started to put things together, he thought “Why not put it on the BLOG, too?” He and his wife, both Presbyterian ministers in central California (Coalinga, CA), have a great blog called Raine ‘N Blessings.  If you click here, you’ll find the post about how he first saw Mary at the bank and was struck by her energy. Later, at a church picnic, he was looking all over for her, only to find her asleep in the car. He says, “Without disturbing her, I walked back to the picnic, shaking my head and mumbling to myself, ‘Oh, this is so not going to happen.’ ” 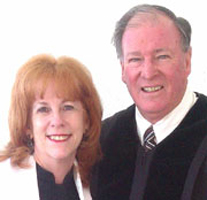 Steve’s next post was about how I sent him on a treasure hunt to the garage to dig up old photos, and in the process, found two sets of his late father’s false teeth! Thanks so much for looking, Steve, because these pictures are just priceless! His latest post has some great photos of their wedding, which took place in her parents’ backyard.

I also loved the post about Steve’s battle of the bulge — and he’s winning! He shares his secrets here.

Steve and Mary are both graduates of Fuller Theological Seminary in Pasadena, CA. Mary is the solo pastor of Coalinga First Presbyterian Church, and Steve is a Presbytery minister-at-large.

At the Air Force Academy Chapel in Colorado 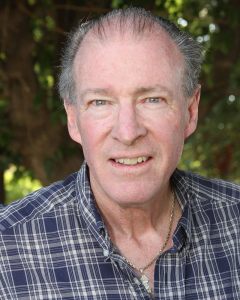 A recent photo of Steve Raine