Photo by Roger Guggenheimer showing an icicle hanging from the school roof, depicting how cold it has been in McCloud lately. He says it is getting up to 25°, which is warm considering the temperatures of this past week! 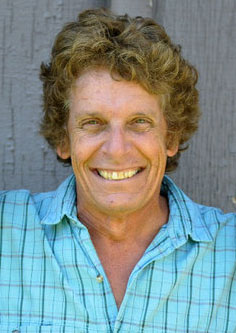 Roger is an elementary school teacher.

There’s no question that ever since the awful shooting tragedy in Newtown, CT, there’s been a focus on elementary schools and the teachers who protect children . . . everyday heroes, if you will. That’s why I was glad to hear from one of our BHS’68 grads, Roger Guggenheimer, who teaches a 3rd-4th grade class at McCloud Elementary School, McCloud, CA. The school’s small classes enable students to focus on learning and allow teachers to work one-on-one with students. Roger’s class only has 11 students!

He writes: The tiny but mighty small country school I teach at is McCloud Elementary, located on the eastern flank of Mt. Shasta in far northern California. Our school has a wonderful variety of programs including competitive sports and skiing/snowboarding. Academics is a big focus here, though we have a small staff. What we lack the most is technology. With California’s budget under the gun, our computer lab went down the drain. Each teacher has one fully functional used computer that was donated by the Forest Service. . . I miss the days when we could actually teach with a complete computer lab, but there just isn’t any money to buy any new computers . . . All this means we have to rely on ourselves to do the teaching the old-fashioned way, with books, and it does work. To date we still have money for plenty of supplies, unlike so many other places.

I was especially glad to read on his school’s website that the children in his class sing complex songs and create new lyrics for other songs. They learn to read rhythms as well as music on the staff, accompanied by “Mr. G’s musical expression on a bamboo xylophone.” With music often being the first program to be cut in public schools, this is welcome news indeed.

It was my question, “How did you end up there, anyway?” which led Roger to answer that it was due to a hitchhiking trip to Mount Shasta, CA which changed his life forever, and caused him to move lock, stock and barrel to this small town, population 3,394.

Roger says, “Life is slow and easy here, and there is no crime to speak of. As a 20-something I wanted to ‘go back in time’ to a more gentle era where people knew their neighbors, spoke to one another, and watched out for each other. I struck it rich when I landed here. Not in money, but just in the lifestyle of no crowds, no traffic, lots of trees, fresh air, blue skies and fresh, clear chemical-free water to drink and recreate in . . . Hard to believe I’m still in California.”

He says that when he wants more excitement or culture, he hops on a jet and flies to another country where he can pursue one of his favorite sports, scuba! 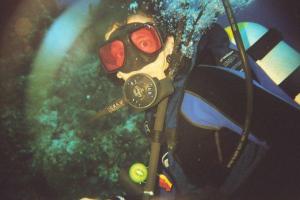