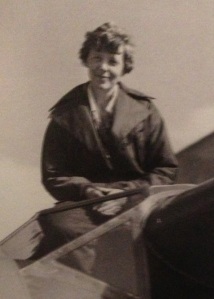 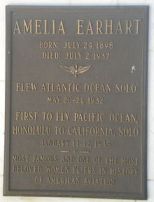 Plaque at the Portal of the Folded Wings, Burbank

Chances are, you probably never heard of a connection between Amelia Earhart (the first female pilot to fly solo across the Atlantic who disappeared on July 2, 1937) and Burbank. Yes, the same city of Burbank we grew up in, in Southern California. I never had connected the name of Amelia Earhart with Burbank, CA, either, until this past weekend when I took an out-of-town guest to the Pacific Aviation Museum here in Honolulu. Earhart became the first person to fly solo from Honolulu to Oakland, CA  on January 11, 1935.

As I looked over the display, I found a photograph titled “Amelia Earhart Burbank Airport – December 22, 1934.” Further research revealed that Amelia Earhart married George P. Putnam on February 7, 1931. Theirs was a progressive marriage at the time, since she kept her maiden name and believed in equal responsibilities for both. According to Wikipedia, she “referred to her marriage as a ‘partnership’ with ‘dual control.’ ” In a letter she wrote to her husband on the day of her wedding, she said, “I want you to understand I shall not hold you to any medieval code of faithfulness to me nor shall I consider myself bound to you similarly.” 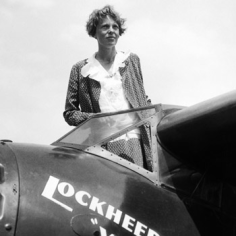 See “Lockheed” on the side of the plane?

They decided to move to the West Coast and in fact bought a house at 10042 Valley Spring Lane, near the clubhouse of the Lakeside Golf Club in Toluca Lake, which as you know, is adjacent to Burbank. They bought a house here because she believed “the best aircraft in the world were being designed and built nearby at the Lockheed plant in Burbank.” If you’d like to see official photographs of Amelia Earhart in Burbank, click here. 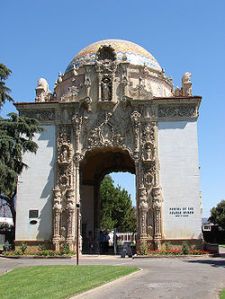 If you click here, you can read about the 75th anniversary of Earhart’s disappearance after an attempt to circumnavigate the globe and the launch of a new search.

I also found a picture of the Portal of the Folded Wings Shrine to Aviation and Museum which is located in Burbank at 10621 Victory Blvd, and is the burial site for 13 pioneers of aviation. It was built in 1924 as the entrance to Pierce Brothers Valhalla Memorial Park Cemetery. That’s where the plaque memorializing Amelia Earhart is located.