Along with Bonnie Moody Rapp, Jodi Tillotson Huddleston recently revealed to us that she is also a great-grandmother! She is the mother of two boys and two girls — the older son is in Florida, retired from the Air Force and is starting as a Correctional Probation Officer with the Florida Department of Corrections. They are the parents of two girls and one boy. Sadly, her other son passed away when he was 13, almost 20 years ago. Both of her daughters both live in Colorado — the older daughter has four children, and the younger daughter also four children, including a set of twins. Altogether she has eleven grandchildren ranging in age from 21 to 1-year-old twins, and one great-granddaughter. 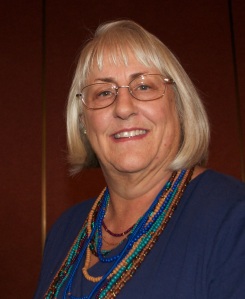 Jodi’s second husband passed away from cancer in 1984. She worked for a Thousand Oaks newspaper for almost ten years, then tired of commuting, she up and moved to Colorado. She says that she loves the seasons and the Rocky Mountains. She says that Fort Collins is much like Burbank when we were growing up — except that it is a vibrant college town with Colorado State University. Jodi worked in the Physics Department at CSU for four years.

Now Jodi works as a support clerk at Enterprise Rental Cars. This past April she had a wonderful vacation to New York City and saw Wicked, on Broadway — another thing she could cross off on her bucket list.

It was great to see Jodi at the 45th Reunion!