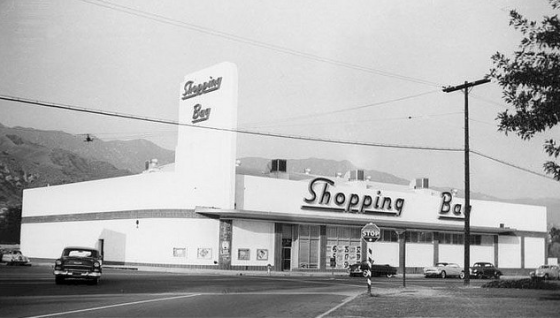 The Shopping Bag store on Glenoaks. Photo from the Burbankia website.

If you have a SUPER memory, you might recall that the Shopping Bag store was on the corner of Glenoaks and Irving, and near Currie’s Ice Cream and J Scott Drugs. And if you happened to have gone into the store in 1967, you might have had Rex England bag up your groceries for you. Rex started out as a bagger in the Burbank store, then became a meatcutter. In addition to working for the Burbank stores, he also worked at the Glendale, Sunland and La Crescenta stores before he moved to Grass Valley, CA (near Sacramento) in 1978. The Shopping Bag grocery chain was acquired by Von’s in 1960, and at that time it was their sixth largest competitor. The merger was challenged by the FTC on antitrust grounds, and the chain was eventually sold to Fisher Foods. Read the whole story here.

Rex England is retired and enjoys the outdoors.

Rex continued as a meat cutter at the Lucky Supermarkets in Grass Valley for three years, then in 1981 he went to work for a family-owned market that has the old-style meat market with over the counter service. He retired in 2003, where he now enjoys the outdoors with his wife, Lynn — skiing, hiking, white-water rafting, jeeping and cycling. Most of all, Rex and Lynn have enjoyed their numerous dogs over the last forty years of marriage.

Rex’s wife, Lynn, just retired after 36 years in the local medical community. Rex writes that they have been married since 1974 and that Lynn was a 1968 graduate of Villa Park High School in Orange County. They never had children but have always shared their home with two or three rescue dogs.

Thanks for writing, Rex! It was great to hear from you!