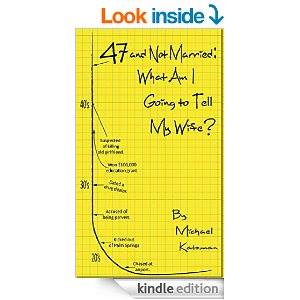 Our classmate, Michael Katzman, is now a published author of the book, 47 and Not Married: What Am I Going to Tell My Wife?, now available on Amazon. Click here for the link. Here’s the official synopsis:

Rationally believing that his dreams were far out of reach, he settled for an ordinary timeline: Finish high school, go to college, work in family retail business, and get married. It was a plan to settle in early and easy. It didn’t go that way.

As the years went on, his timeline swerved in ways he had never imagined, eluding the settled life he believed he would just fall into. Every strategy to get back on track–wife, kids, backyard barbecues–led to unexpected adventures, narrow escapes, and professional success. However, when he reached the age of forty-seven and still unmarried, he became obsessed that he had numerous bizarre personal habits to hide. How was he going to explain this to his wife?

If you look at a previous post in this blog, you’ll recall that Mike, along with Dale Rubin, were part of the Dynamic Duo of the Burbank Hi-Life newspaper which wrote a satire column each issue. From the author’s bio: For most of his life Michael Katzman just went with the flow. Believing that he was destined to work in the family retail clothing business, he never considered that he would return to college, become a teacher, computer programmer, data analyst, technology consultant, and expert in the field of standardized testing prep. Having given up becoming a writer in college, he would later edit hundreds of college essays, write motivational school programs and speeches, win grants, and compose documentation for schools. His motivational theatrical productions were seen by tens of thousands of students in the Los Angeles area. He lives in various locales in California.

One of Mike’s students gave the book five stars, and says: “Now it makes sense — this was my English teacher from 10th grade: Do you have a teacher that you just cannot forget? This guy is one of those for me. I had Mr. Katzman as my English teacher in ’82 and ’84. This is the story that he never told in class. Mr. Katzman has a way of telling a good story. It’s easy reading, it’s like watching a narrated movie. Images are vivid, you can feel the heartache and you just want to root for the underdog! If you ever wondered what teachers did after school, read it here. I will never be able to think of Mr. Katzman same way again :). ps If you think my grammar or spelling is bad, blame Mr. Katzman.

Dale says: “Michael tells me there is a very familiar character in chapter 5. Let’s all support him and buy his book!”