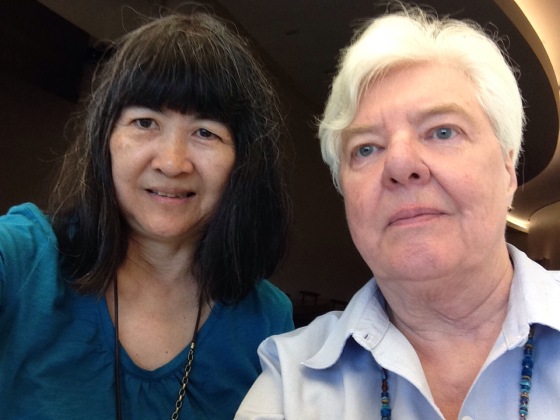 Kathy Au Crosier and Barbara Weitbrecht had not seen each other in 47 years!

I am presently in the Washington, D.C. area and I couldn’t pass up the opportunity to visit with a member of our Burbank High Class of 1968: Barbara Weitbrecht, who works at the Smithsonian as a database programmer. We have known each other since kindergarten days at Emerson School, and figured that we have not seen each other since high school days — that’s 47 years!

Barbara attended the University of California at San Francisco and majored in marine biology. After she obtained her master’s degree, she got a job at the California Academy of Sciences in San Francisco. In 1988 she took the job at the Smithsonian, and twenty-seven years later, she’s still there in what she calls her “dream job,” where she works in the National Air and Space Museum. She loves museums, and takes advantage of the many special exhibitions. 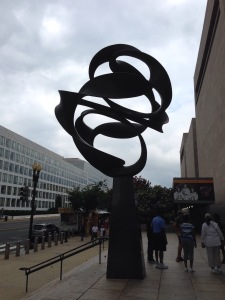 I met Barbara at the entrance to the museum.

I found these fascinating facts about the museum (from their website):

Barbara is about halfway through on writing a novel about alternative realities. She published Ten Dragons, available from Amazon, which she describes:

This is a book about dragons. 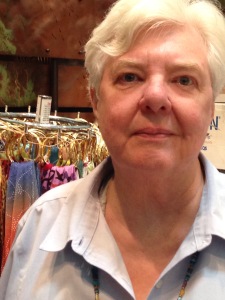 Working at the Smithsonian is a perfect job for Barbara.

The subtitle, “a chapbook,” is often applied to small, hand-crafted, self-published volumes of poetry. Like a poetry chapbook, this book is short — barely 33 manuscript pages. And, like poems, the ten chapters are self-contained texts, united by a progression of ideas. Despite a shared character, the wyrm-slayer Sir William, they are not meant to form a single story.

Some chapters, notably “Dark” and “Egg”, are evocative fragments; others are traditional stories, with a beginning, middle and end. The settings range from an imagined Medieval society to modern times. The dragons range from the literal to the symbolic.

I hope you enjoy reading this book as much as I enjoyed writing it.

Both of us marveled at how we have been able to connect with classmates through the Internet and especially through Facebook. Both of us also wondered how it was that some of our classmates remembered what we had written or said even from junior high days! And unfortunately, the memories are starting to fade.

Still it is important to reconnect with one another, especially in this year when most of us have or will turn 65. I can’t promise that I can visit with every member of our class but perhaps you can write how you celebrated your birthday this year?