Time and time again, we have reconnected with people we haven’t talked to in years — thanks to the wonder of the Internet and social media. It so happens that two of our “X” graduates have found this blog lately and have contacted us. One of them is Brett Wilhelm, who was kind enough to send along some missing elementary school photos (Emerson and Jefferson). I’ll tell his story first.

Look at this picture which Brett sent of Mrs. Gedda’s fourth grade class in 1959-60. 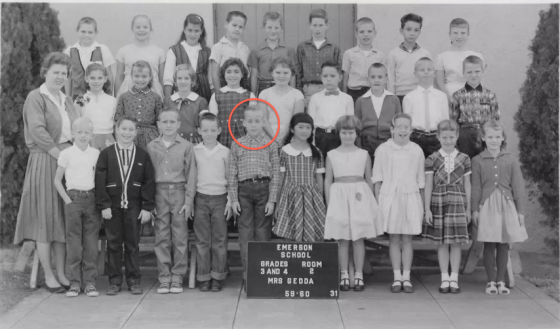 Grade 4, Mrs. Gedda’s class. Brett is standing right next to me (I’m the one in the pigtails!) 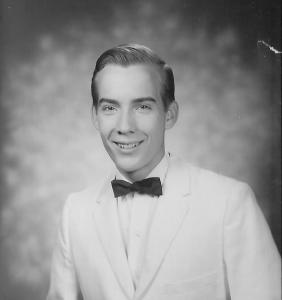 Here’s what Brett looked like in his senior year.

I remembered the name Brett Wilhelm, but when I went looking for him in the Ceralbus, his picture wasn’t there. According to Brett, he completed his senior year of high school in South Carolina but returned to earn a B.S. in Business Administration at USC. He worked for several years in the family’s physical therapy equipment manufacturing business which originated in Burbank and later relocated to Temecula. After that business was acquired by a publicly traded firm he started a home medical supply store in Temecula and later opened a second location in Fallbrook. 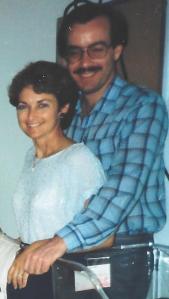 Brett married his best friend Jan in 1987. Since 1995 they and their German Shepherds have enjoyed living in a very scenic area on Whidbey Island just north of Seattle. In Washington state Brett spent his business time managing commercial real estate.

I did a Google search on Brett and found this picture of him in the South Whidbey Record. Brett said he is wearing the brown V-neck sweater in the newspaper photo.

He wrote, “As the 2011-12 Island County Republican Party Chairman, it was my responsibility to rent locations for the Party’s pooled precinct caucuses. One of those locations was South Whidbey High School where this photo was taken.

Brett said that he was a few minutes early for an appointment with the school principal to reserve the venue. While he waited in the outer office, another man entered and told the secretary he was there to pick up an envelope for “Zook.” Brett looked up and instantly knew the man had to be related to our classmate, Mike Zook. He was! It was Mike’s brother, Doug Zook BHS’61, who also lives on Whidbey Island. Brett has known Mike Zook since they were both in Mrs. Greene’s 3rd grade class at Emerson. He says, “Now Mike and I have reconnected thanks to meeting his brother by happenstance over 1,000 miles north of Burbank!”

And luckily, Brett happened upon this blog and we are now reconnected!

I’ll tell Steve Bowers‘ story in the next post.