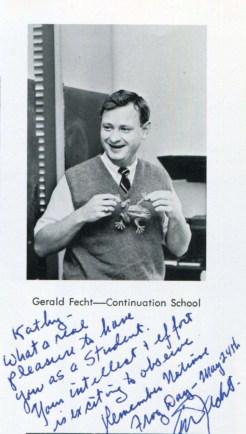 Today BHS’68 graduate, Roger Guggenheimer, informed us of the death of Mr. Gerald (Jerry) Fecht, one of our favorite teachers. I wrote a post about him five years ago, (“I found Mr. Fecht!“) where he had retired from Moorpark College and became president of The Museum of the San Fernando Valley. Many of us had Mr. Fecht for Senior Studies, but one thing that I never forgot was the collection of frogs in his classroom.

I found a biography of Mr. Fecht which he wrote himself on the occasion of his 50th reunion from Notre Dame High School, class of 1957, and I’ll quote some of the more interesting points here:

Jerry Fecht was born in Mexico, Missouri, where it is said that the original Santa Fe Trail began. Fecht is Alsatian name pronounced with a Helvetian accent – hence “fate.” His working class family moved often, living in Washington State, Iowa, Missouri, California and Nebraska. By the time he enrolled at Notre Dame High School, he had attended 11 schools. A Christian Brother came to Jerry’s 9th grade class in Omaha, Nebraska and convinced the boy that he could serve the Lord and live in the warm Napa Valley at the same time. The 13 year old got a job in Greek restaurant, earned money for a Greyhound ticket and traveled alone to California. St. John’s minor seminary on 3rd and Detroit in Hollywood was Jerry’s new home. The school moved the following year inside the Mission San Fernando. As much as he loved living in the Fairfax district, Jerry hated the confinement of the mission. He wrote his parents in the Midwest that he would come home in the fall, but left the seminary in June.

A summer of sleeping on the beach, staying with friends, and exploring Los Angeles, came to an abrupt end when his parents discovered his whereabouts. The Fechts quit their jobs and came immediately to Van Nuys, where it took much cleverness to gain control over a boy who had been away for two years and free all summer in the city. Fall arrived, and with it enrollment at Notre Dame High School. Jerry absolutely loved Notre Dame! He had the good fortune of joining the Speech Club and falling under the influence of Brother John Doran, who molded a marvelous bunch of kids into one of the most successful speech and debate teams in Southern California. 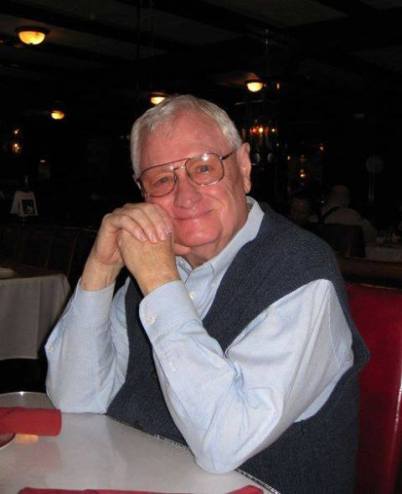 Jerry gave little thought about college. In his family, it was considered an achievement to finish high school. His summer was spent working at Hughes Market and attending training schools in the Navy Reserve. September arrived and Notre Dame pals went off to colleges, joined the Brothers of Holy Cross or got married. On a lark, Jerry enrolled at Los Angeles Valley College.

… Graduation brought the reality of student loans and Jerry returned to the grocery store. 1962, a time of self-pity and confusion, ended when he discovered that USC had just created an Education program for classroom interns and student teaching. Jerry embraced the $125 a month stipend, and returned to school.

In his first year of teaching at Patrick Henry Jr. High School in Granda Hills, Jerry taught the 7th, 8th, and 9th grades. The following year, he was hired by the Burbank Unified School District, where he taught the 10th, 11th and 12th grades. He coached Burbank High’s speech club and student council, and of course, checked hall passes. To his everlasting fortune, Janne Shreves, a young Pomona College teacher was hired at the same time. In 1967, the couple was married at St. Francis de Sales church in Studio City. That summer, the Burbank Human Relations Council and American Jewish Committee gave Jerry a fellowship at Loyola University.

Three years passed and Jerry was asked to start Burbank’s “continuation school.” It was to be a “catch all” for kids who could not fit into normal classroom situations. In the 1960s towns like Burbank had no “public” problems such as juvenile crime, addictions or kids who had been abused or neglected. Jerry had 40 students, many of who were wards of the court in a high school deemed unsafe during an earthquake. Jerry loved his “misfits”, but six of his kids were dead by the end of the first year. He was honored as teacher of the year by the Chamber of Commerce.

You can read the complete biography here, but I wanted to share with you some of the tributes which have been posted to Facebook and elsewhere.

“I am so saddened to hear of the passing of Gerald R. Fecht. He was and is an amazing mentor in my life. I owe an amazing amount of respect and honor to this man. He guided me through a lot of good and bad times in my life and inspired me to never put limitations on my goals and success. I went to USC and got two Bachelors degrees in 3 years, and to Cal State Northridge for my Masters degree on his guidance and advice and help. No limits Jerry. He told me I could play polo professionally, or Ride Traveler, or start my company or become a stuntman or any other thing and always made sure that I broke any limitations that anyone placed on me or I placed on myself. Thank you my dear Mentor and Brother. In your own words, may you travel safe to the Gates of Valhalla and may you find your Peace and Comfort. But not too long, because you have work to do up there as well. Love you dearly and will miss you dearly in body. But you are always in my heart and soul – Fight On forever my Trojan Brother. My deepest and sincerest condolences to your entire family and everyone that loves you. Janne Fecht if you need anything, please let me know. I am here for all of you.” (Ardeshir Radpour)

“One of the most intelligent, caring men to grace our lives and a talented artist that I was blessed to have worked for, passed away this morning. RIP Jerry.” (Steve Broggie)

“Miss you my friend. A rare soul who made everyone around you better.” (Billy Kay)

“It’s with a heavy heart that I report the passing of one of my favorite teachers of all time. Jerry (Gerald) Fecht passed this morning in his sleep…..he was a true hero in my life that I always remembered and thought of—amazing guy (and his classroom full of stuffed frogs) US History 11TH GRADE BHS.” (Roger Guggenheimer)

“Beloved friend, mentor and teacher – one of the most influential people in my life. Great heart, great passion, great honesty. I would not be the person I am today if not for him.”

“It wasn’t what he taught in class but what he taught me about life. I would never have tried starting a career in the music industry if it wasn’t for Jerry. his lectures were insane but funny.”

“Jerry is by far the most influential professor I have ever had the pleasure of meeting. No other teacher has shown as much compassion for his students and fellow man like Jerry has. If you have a chance to take any of the classes he offers, you would be a fool to not take it.”

“the best teacher I ever had in my whole school career. The best storyteller you can find and very emotional.”

“The best teacher. EVER.”

Class of 1968: If you have memories of Mr. Jerry Fecht that you would like to share, please write them in the comments section below.