I had Mrs. Doris Adams for art at Burbank High. Did you?

Mrs. Doris Adams passed away at age 96 in March 2018.  She was born June 17, 1921, her passing being just a little more than three months from her 97th birthday.  After she retired from Burbank High she and her husband moved to Laguna Beach in the 1970’s.  They moved to a retirement residence in Aliso Viejo near Laguna Beach a number of years ago.  Mr. Adams passed away about nine years ago.  Mrs. Adams continued being very involved where she lived, including teaching art classes.  Up until the last few years she swam everyday, and continued to drive locally in Orange County.

In June of 2015 she attended our BHS ‘70 45th reunion at the Castaway in Burbank, along with her daughter-in-law, Linda Sherbert Adams – BHS ‘69, and her granddaughter, Kelly Adams Knott.  Mrs. Adams enjoyed a wonderful long life.  She had her 49th birthday on June 17th, the day before our class graduated from BHS on June 18, 1970, now almost 48 years ago!  I was one of the lucky ones who was in Mrs. Adams’ art classes during my senior year at BHS, and was able to keep in touch with her over the years, especially the early years after being in her classes.  Mrs. Doris Adams is survived by her family who loved her very much, her two sons and their wives, her grandchildren, and her six great-grandchildren.

This photo was taken several years ago on her balcony where she lived in Aliso Viejo. 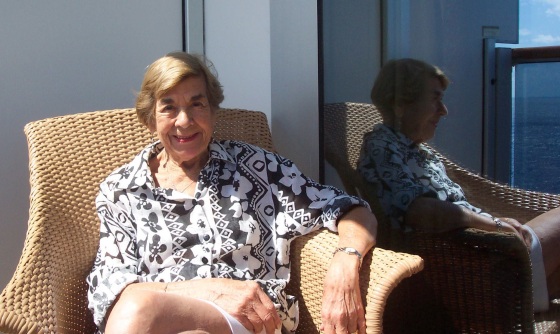 Mrs. Adams on her balcony

Here is a recent photo of Mrs. Adams and her grandson, Matt Adams.

And before it’s too late…

We heard from Science, Math, Photography teacher and Junior Varsity Basketball coach Leon Frankamp recently who wrote: About three inches of beautiful wet snow here and the moisture is a blessing!  My cancer has returned but no details until next week as to how much and exactly where.  A biopsy will be done next week.  But, I am confident everything will be OK!   If you would share my info about the cancer with your address list, requesting prayer, sending prayer for my condition I would appreciate that very much!  Again, thanks so much.  With love and respect, Leon