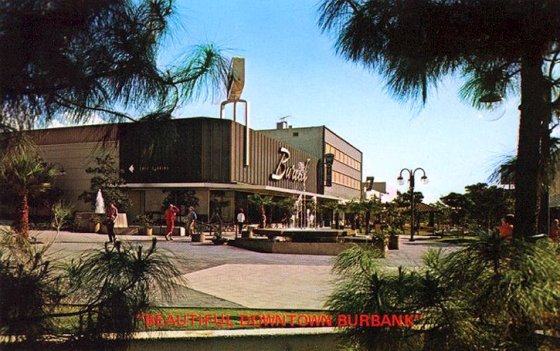 My family frequently went shopping at the BurCal department store.

Well, it’s been exactly 44 years since that phrase was coined in a show called “Rowan & Martin’s Laugh-In.” Hosted by comedians Dan Rowan and Dick Martin, the show had its premiere in 1968 and was broadcast on NBC, one of those buildings you always drove past on Alameda Avenue. It was Gary Owens who was the announcer for Laugh In, and coined the phrase. Johnny Carson’s Tonight Show frequently joked about being broadcast from “Beautiful Downtown Burbank.”

I think it was meant to be a joke — of course when we graduated from Burbank High, the downtown area was pretty ugly, nothing worth remembering. When I heard the phrase “downtown Burbank,” I thought it referred to that retail area on San Fernando Road that at one time became the Golden Mall. Now — there was an experiment gone bad. The city planners decided to convert the area to a pedestrian mall and discovered that people were unwilling to get out of their cars. Consequently no one went shopping there anymore! The area was reopened to traffic in 1989.

Today the phrase “Beautiful Downtown Burbank” is a service mark owned by the Burbank Chamber of Commerce. I found out this information from our classmate, Roger Guggenheimer, who turned me on to a website all about Burbank, written by Burbank High grads Wes Clark and Mike McDaniel.

Did you know that NBC is leaving Burbank and will be moving to Universal City? Watch the YouTube clip below.