Sooner or later, it seems like everyone gets to Hawaii, especially people who live on the West Coast. Having lived here for over forty years, we have entertained hundreds of visitors from the mainland US, Europe and Asia. We’re now on volume seven of our guest book, a tradition we started at our wedding.

Jim at the Byodo-in Temple on the windward side.

So a couple of weeks ago, I was happy to entertain BHS’68 graduate, Jim Ranshaw and his wife, Patti, who were on a 15-day cruise from California to Hawaii and back. When looking up my address on a map, Jim remarked that their ship was going to dock just four blocks from my home so, after their arrival in Honolulu, they just walked to my building.

Even though it was their sixth visit to the islands, I was able to take them sightseeing to some places they had never been before. On the other hand, they requested that I take them to the International Market Place, a popular tourist destination in Waikiki, where I haven’t been for forty years!

I know a lot of you have visited the Aloha State — I just heard from Mike Mooney, who visited Maui last week. So this is a request for you Burbank High grads, Class of 1968. If you have visited Hawaii, how about sending me a picture of yourself here? Or, if you are a Hawaii resident (and that’s about nine of you BHS’68 grads!) how about giving us an update as to how you got here and made the decision to stay?

Hope to hear from you! And if you plan to visit Honolulu, write to me (at the Contact tab), and maybe we can meet. 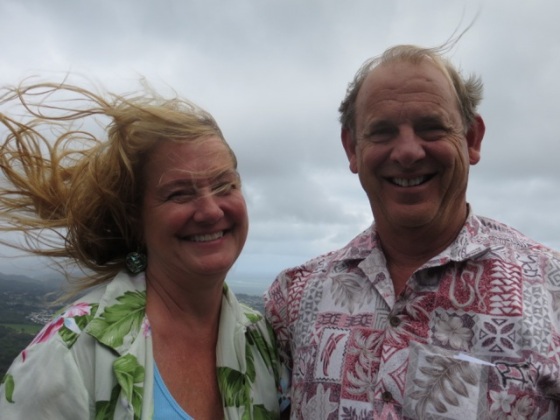 Jim and Patti Ranshaw at the Pali Lookout. Wow, it’s really windy up there!