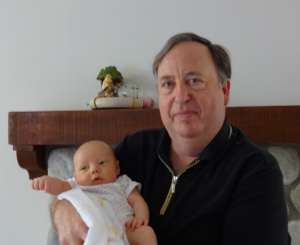 Dave Campbell and his grandchild, Diego.

Not long before our 45th Reunion, we got a message of regret from BHS’68 grad, Dave Campbell, with the awful news that he was diagnosed with prostate cancer. He had even sent in his money for the reunion, but asked that we keep it to help with expenses. Dave says that we have lost so many classmates to cancer, and that he would like to share his cancer journey in the hopes that it can help someone going through the same fight.

Here’s what he wrote:

My cancer led me on a journey of four months, from stage four to being cancer free at this point. It started on August 6th with a Needle Biopsy, and the results came back as advanced and a fast growing type of cancer. My doctor called me on 8/10, a Saturday morning and (grandson) Diego’s baptism, to give me the results and to report on Monday to his office. On Monday, 8/12, the facts were very clear and the date of 9/25 for surgery was set.

A Laparoscopic Radical Prostatectomy was the best course of action to be taken. On 8/20 a CT Scan was performed and on 8/29 a Bone Scan was taken. Both showed that the cancer was only in the prostate—another real blessing. Just prior to surgery I had two units of my blood drawn in case it would be needed during surgery.

On 9/25, Surgery Day at Kaiser in Downey. My son and daughter-in-law and Mike O’Connell (’68 classmate) joined me for this epic day. After all the paper work and surgical prep work, I was introduced to the Robot. The surgery was over four and a half hours and I spent one hour in recovery. My doctor had talked to my family and Mike and felt we were in good shape. That night, very late, the nurse got me out of bed for a very short walk. On 9/26, about four in the afternoon I started home for recovery.

I spent three weeks at home, working part time. I am lucky that my office is very close to home—finally no commuting. The following weeks I came in slowly and worked part time at the office for two more weeks, then I was back to a regular schedule.

Then the day comes which is an emotional time for anyone—what is your status—am I cured or do I need more treatment? At eight weeks I had several blood tests taken— PSA primarily—on 8/15 it was 5.84, and on 11/25 it was 0.1. No radiation is needed at this time! The next action for the first year is a blood test every three months and a yearly check up after that for several years.
In short, in as little as four months my life has taken a dramatic change, emotionally, physically and how I am going to live the rest of my life. Every day is just a little more special and you need to have lived through a life-threatening experience to understand.
A lot of things happened during the eight week recovery, (but) some things are better left alone. I will be in recovery  from surgery over the next six to eight months, but for now I am able to function as a normal person.
Dave, thank you so much for sharing your story, and for being so courageous! Dave says that if anyone is undergoing a cancer battle, he is available by email or by phone at 714-336-0993. He hopes to see everyone at the 50th Reunion!