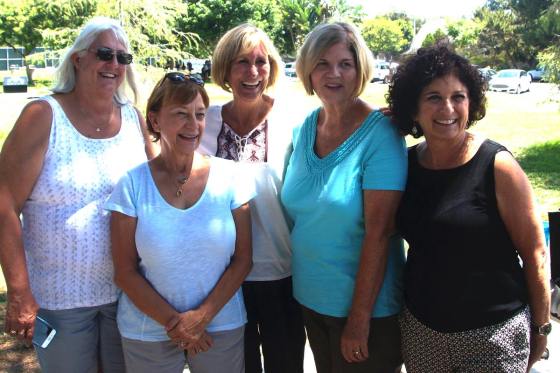 Before and after pictures — don’t you love them? I think that in the case of our class members, the “After” pictures definitely look better! This past weekend, there was a reunion of the Burbank High Class of 1967 plus friends at the DeBell’s Canyon Grill, and many of the Class of 1968 decided to join them. From the guest list, a good many were from the Class of 1968 and included: Christine Cullen Bartlett, Tom Bennett, Annette Dinolfo Bennett, Bob Fabrizio, Dennis Gray, Teri Hill Clark, Nancy Frisch Silverman, Teri McComas Mrasak, Jodi Tillotson Huddleston, Michael Katzman, Sallie Shelton Thomas, Johnnie Marie Solomon-Thorsch, and Patti “Trish” Molloy Vosper (hope I didn’t leave anyone out!)

Unfortunately I wasn’t able to go, but I certainly enjoyed seeing the pictures people posted on Facebook. If you remember from my post about Teri Hill Clark (“Joy and tragedy through 47 years”), her three bridesmaids were all from the Class of 68, and 45 years later, they recreated the pose from the wedding as shown below. Teri wrote: Thank you to Cathy Emmett Palmer and Jim Grasse for spearheading the Class of 67 reunion, including “Plus Friends” … in addition to providing a great opportunity to gather and reminisce, especially for my hubby, Jerry Clark, you also brought together my bridesmaids (Class of 68) for a photo op retake from our wedding 45 years ago on August 15th, not to mention revisiting Burbank after having been gone for over 40 years! Your time and energy has a tremendous ripple effect!!!

Hey, anybody else from the Class of ’68 want to share pictures of this reunion? Send them to me at burbankhigh1968@gmail.com.