Yesterday was our first event for the Class of 1968 Reunion: a tour of the new and improved Burbank High School. In 1996, the city of Burbank passed a school bond for the rebuilding of Burbank High School. Phase I was completed in 2001 and 80 new classrooms had been built, along with the administration offices and a counseling center. By 2003 there was a new Performing Arts Center (including the Wolfson Auditorium, named for beloved drama teacher, Deanne Wolfson) and more than 100 classrooms with lighting and most importantly, air conditioning! I do remember that some of those old classrooms got awfully hot at the start of school. Ninth graders came back to the school, increasing the student population to nearly 3,000 by the year 2011.

We met at the far end of campus, where the old Science building was located near Delaware Road. It has been completely replaced by a parking structure and athletic facility—but what I was more interested in was taking photos of my former classmates!

Our first stop was to the Athletic Hall of Fame where trophies and other sports memorabilia are displayed. 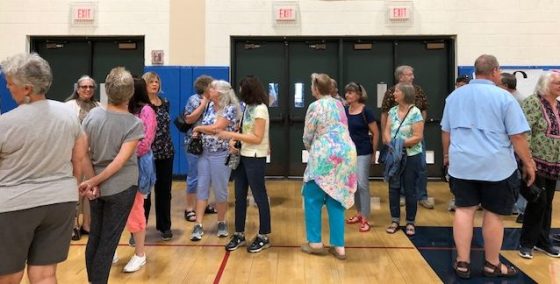 We walked outside to a brilliantly clear day and saw the new football field. Games are still played at John Burroughs field, though, because there is no space for fans of the opposing team on the opposite side of the field.

Next we walked toward the Art building, and I took more pictures of our classmates along the way.

On our way to the main academic buildings we saw the new dance studio and swimming pool.

We ended our tour of the Quad, a brand new complex of buildings for teaching the academic subjects. The courtyard is where students enjoy their lunch.

Administrative offices are located just off the Quad.

You know the saying, “You can’t go home again”? Touring this new school facility was like going back to a home you have grown up in — and the present owners have remodeled it beyond recognition: Same in some ways, but oh so much better now!

I was impressed by this sign as we departed.

Posted by Katherine Crosier on October 6, 2018 in Burbank High School.