All of us probably know someone in our close circles who has survived cancer or other health scare. Our classmate Laura Ziskin lost her battle to breast cancer in 2011, but not before starting the charity, Standup2Cancer. It was only in September of this year that I read this on BHS’68 Crilly Butler‘s Facebook wall:

Crilly and his wife Takami

Because many people have asked, here it is in a nutshell. I’m going in for cancer surgery and chemo today. I have bladder cancer and have been fighting it for 15 years. It’s come back 5 times–as quickly as 3 months; as long as 6 years (it’s the most recurrent type of cancer there is). I’ve had six surgeries, 6 rounds of chemo, and 40 rounds of immunotherapy. It hasn’t been fun, but it’s been a valuable journey. I’m actually very grateful for my cancer, as it’s confronted me with lessons about receiving from others (I’m much better at giving), and about the preciousness of each and every moment (I think we all have a tendency to live on autopilot much of the time). So while I wouldn’t have necessarily chosen this way to learn these lessons, I’m glad I have. My bladder is still intact and after all my therapy, both the stage and grade remain low. At this point it’s more of an annoyance than a threat. I expect it to remain that way, though it is true that 17,000 people die of bladder cancer every year in the US.

With great love and appreciation, I want to thank everyone for your kind words and healing thoughts. After nine hours in the hospital, I made it home safe and sound, and not too much the worse for wear. Rough night, but feeling good this morning. Pathology results in a week, but no surprises expected. Just another experience that life has thrown my way and for which I am truly grateful. Love to all!

In a recent text message, Crilly wrote: Right now, I’m fighting with my insurance company, since they denied my chemo. I’m pretty confident I’ll prevail, but I’ve had to postpone my chemo twice already. What a hassle! Other than that, I’m doing what needs to be done. Feeling pretty good, actually

Update: Crilly won his battle with Blue Shield and his chemo can finally begin. He writes: “Despite their denial, my appeal, and all the time this took, I’m still very grateful to have excellent health insurance coverage. Many are not so fortunate. . . . I’m feeling great! Not sure what insidious things may be going on inside, but overall I feel terrific!”

Dave Campbell with his newest grandchild.

Another cancer survivor is Dave Campbell, who wrote me recently: “How time has flown by!” Dave says that he still has cancer, but that it is being treated with medication, and so far, so good. He recently had two MRIs to check on what’s going on inside, and so far, Dave’s doctors have worked magic over the past three years.

Dave’s son and his wife Lauren now have a three month old little girl named Lola, and grandson Maxwell is now two. Dave’s daughter, Heather, gave birth to a son named Lucas who is now nine months old, and is already walking! He adds that it was his daughter’s son, Diego, now three years old, whom he credits for helping greatly in his recovery, and with whom he spent a lot of time when he was diagnosed with cancer.

Jenna is Dave’s college student and wants to be a nurse.

Dave himself has been raising Jenna for the past three years, and she is 18 years old and in her first year of college. He met Jenna’s mother when Jenna was five. According to Dave, Jenna’s mom has had a rough time and had to take care of her late father for years, so Dave is back to parenting at age 67.

And talk about a survivor! Larry Marak recently posted on Facebook:

Survived sudden cardiac arrest on Dec 4th last month. I was just finishing my daily bike ride when I suddenly felt deathly cold, then faint, then fell off the bike dead, no heartbeat, no pulse, into the middle of the road. 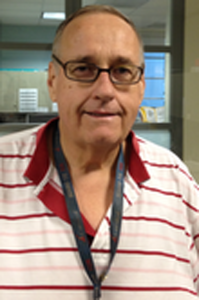 A recent photo of Larry Marak

Per my heart surgeon “a higher power” and my internal cardiac defibrillator brought me back. Survival for cardiac arrest outside of a hospital is 7%. Everything lined up in my favor that day. I collapsed on a quiet residential street, no traffic and on an asphalt surface so I wasn’t grounded when the defibrillator went off. There were two residents on the sidewalk who ran to my aid. I got to Providencia Urgent Care within 10 minutes and St Joseph’s emergency within half an hour.  And my defibrillator, which is under factory recall for a defective battery worked the one time it needed to, and I restarted immediately, so there was no brain damage.

At my church they’re calling me Lazarus. The experience of dying and coming back sure makes you think intently about WHY you’re still on this Earth.

No, thank goodness it’s NOT your time yet!