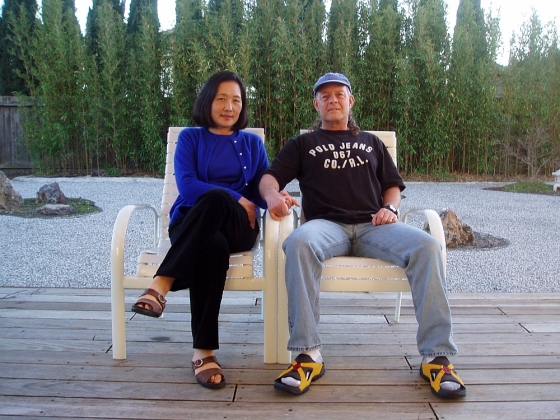 Crilly Butler and his wife, Takami, relax in their zen garden.

In looking over the comments people have made to the blog, I read the one by Crilly Butler concerning Miss Linda Bergman, our French teacher. On a whim I did a Google search on “Crilly Butler” and came across a wonderful article about a Zen garden which you can read by clicking here. (The article also shows a number of pictures from the garden, so I highly recommend reading it.) It was indeed the same Crilly Butler from our class!

Crilly spent a year living in Japan where he studied aikido with Steven Seagal and met his wife, Takami. They were married in a traditional Shinto ceremony at Izumo Taisha, near her home town, then moved to Davis, CA a few months later. In 1996 they purchased a large lot and designed a hybrid Japanese/Western home, including a traditional Japanese “hachi-jo” tatami room on the second floor.

I asked Crilly about his unusual first name, and he said that it was his grandmother’s surname, which was hard growing up with, but he is pretty sure that he is the only Crilly Butler in the country. He is currently a Senior Information Systems Analyst for the State of California, and designs Oracle database applications and data warehouses. Crilly also is a website designer and developer. His wife Takami is a pediatric occupational therapist specializing in autism and has gone back to school after thirty years to get a doctoral degree. Their son Nicholas moved to Los Angeles to become an actor and model. Crilly says that “against all odds, he’s actually making some headway!”

With Crilly having a Japanese wife, I wondered whether he speaks Japanese, and he said ‘yes.’ That must mean that he learned the language after high school since Burbank High did not offer Japanese in their curriculum at that time! He and Takami visit Japan every other year or so to visit friends and relatives.

Thanks, Crilly, for sharing!